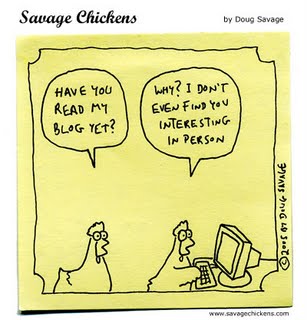 Today while I was on my way to spend the 100 Dirhams my husband left for me, I met a very interesting guy. After exchanging pleasantries,  he made me discover he was a writer. For a writer, this guy surely loves to talk.

Guy: So you write? What’s your genre?

Me: I actually studied scriptwriting for theatre but I haven’t been practicing…

Guy: Oh, I wrote a script once for a CCP show.

I smile and nodded.

Guy: I hope you’re not one of those on-line diaries. I don’t read those stuffs. People who post pictures of themselves, talk about themselves, why do they think people care about their lives…

In my head I was clicking UNSUBSCRIBE.

Guy: You know, when I write, I make it a point to write something important, something that people would learn from. You get my point?

Me: So what do you write about?

Guy: I’ve been working on a project since last year. It’s about (blah blah blah). I was planning to submit it to the Palanca Awards. You know, the highest literary awards in the Philippines? You know?

He continued on talking until finally his ride came. I let out a huge (I’ll say it again) HUGE sigh of relief like a vacuum cleaner was just unplugged and taken far away from me.

Yes, wise guy, I am an online blogger who posts pictures of herself and talks about herself. I’d rather do that online than torture strangers on the streets.

Oh and I forgot to mention, I already won my PALANCA.